Showing posts from October, 2005
Show all

- October 31, 2005
my job is sucking out all the energy i have. i loath coming here. there's no clear direction and i feel pulled in so many directions that i'm about ready to break. i want to leave. it takes everything i have to drive to work and even more to stay for the next 8 hours. I've almost walked out so many times, something i know i can't do. i need to stay here until i find different employment, but i can't seem to find anything. argh. please keep me in your prayers. i'm feeling so drained and frustrated at this situation. i feel like i made such a horrible decision taking this position. please pray for me and if you know of any job, i welcome any suggestions.
Post a Comment
Read more

- October 25, 2005
maybe i'm a glutton for punishment...but i think i'm more of a dreamer. just hoping things may begin to get better...maybe

my folks and i have a pretty stinky relationship. anyway..my mom and i got together last weekend. i wasn't looking forward to it. honestly, i was dreading it. which sucks because i want to enjoy times with my family. but oh well, that's how it is. but last saturday was different. it was actually enjoyable. she wasn't judging me and making me feel like a complete failure. We laughed and it felt natural, it wasn't hard to enjoy her.

so prayers needed...my folks want to come down again this saturday night, spend the night and leave the next morning. now i got both of them. they could tag team. this is what usually occurs. i'm nervous. wanting things to go well but feeling i'm just putting myself up to fall. i'm taking them to church too...ohhh boy.

Post a Comment
Read more
- October 21, 2005
do you ever feel like a complete failure to your folks? maybe it's more like your just invisible and the only time they finally can see your figure through the haze, you've done something wrong? welcome to my relationship with my parents. i know i talk about this a bit too much maybe but it never does cease to amaze me just how non-existent i am. it sucks. all i want is to have a civil relationship with my folks. just one where i don't feel like i'm walking on a glass floor all the time. i hear stories of my friends families and it makes me sad. i'm trying to push away the resentment and bitterness but it seems just i let it go, something knew happens. i know i need to walk with grace and understanding but honestly, all i want to do is stand on the rooftop and yell my guts out. but i know no matter what i say and no matter how loud i get, they'll never hear me.
Post a Comment
Read more

I know your getting sick of the same ol junk flying out of this yapper. But oh well..

i was at the local coffee shack here in lil ol'charlootville when i saw something interesting. paramount coffee company is now roasting coffee beans from Rwanda. they're doing the whole fair trade deal which brings jobs and proceeds to Rwanda. super cool! ya know i'm not a huge supporter to paramount, but it's a cool thing helping out Africa. so here Rwanda fair trade, check out the site. Even little things will help big problems! help support Rwanda!

and if you're looking for some quality joe makin' beans from a super cool fair trade coffee supplier, check out www.puravidacoffee.com. they have an amazing program too
Post a Comment
Read more

- October 20, 2005
so, i think i need to surrender to the fact that i'm getting old. i woke up on sunday with a super sore neck, thinking that i just slept funky...i was wrong! on monday, let's just say pain. shooting pain through my shoulder and into my chest. never have been stabbed, but i think i may have a gander of how much it hurts. so i went to my doctor and she gave me flexeril. wow! 2 days on that stuff and you literally become a moron. so picture me, standinng all stiff with clouded over, droopy eyes. ohhh yes, i've become frankinstien. and now although i have motion back to my body, i'm still a moron. why am i even trying here at work?

to make the matter worse, i think it all stemmed from trying to pick a picture frame off the floor. when the hanger stuck to the ground, my neck whiplashed back down. ohh yes, i think it's finally time to admit that i'm old. BLASTED
Post a Comment
Read more

this is a bit disturbing 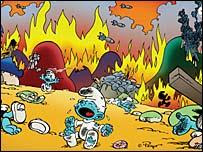 The UN children's agency has launched a hard-hitting ad campaign, involving cartoon legends the Smurfs being blown away in a sudden air strike. to read the story and watch the clip go here 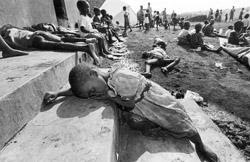 since February 2003, government-sponsored militias known as the Janjaweed have conducted a calculated campaign of slaughter, rape, slavery, starvation and displacement in Darfur.

it is estimated that 400,000 people have died due to violence, starvation and disease. more than 2.5 million people have been displaced from their homes, over 200,000 have fled across the border to Chad and 3.5 million people are now hungry. many now live in camps lacking adequate food, shelter, sanitation, health care and most importantly safety.

this is a photo from the Rwandan genocide in 1994. our government did nothing in 1994. although world leaders vowed to never again allow this kind of violence to ensue, the united states again, for the past 2 years have turned the other cheek.

i hate to do this. it make my stomach turn and my heart ache but i feel that i must post these photos. although our government sits aside as innocent women, children and men and raped, tortured and killed for senseless reasons, w…
Post a Comment
Read more
- October 10, 2005
i saw this today...

i think this must be in the forefront of our minds at all times. GOD wants us to be CHRIST like. am i? and if I'm not, who have i just shown unlove to? who have i turned a cold cheek to? to be like CHRIST is such a massive thing to wrap my mind around. i hope y'all keep me accountable. i see the judgements placed on people for how they look, what church they belong to, how they act…the list goes on and on and let me tell you that I'm not apart from judgement. I find myself judging and it kills me every time. i hate it. help me to be CHRIST like.

- October 07, 2005
I enjoy the internet...my life unfortunately, seems to revolve a bit around it. but I hate it even more. i want to blame the people who place things on the web that i shouldn't be looking at. but i can't. the only person i can blame is myself. sometimes i feel like a drunk trying not to drink, walking through a grocery store and running into the wine section. although i try to keep my eyes from looking towards the wine rack, sometimes i end up there, alone. a drunk surrounded by wine. and once i get there, it's so hard to walk away. as in the internet. so much fun, yet so much danger. as i innocently search and peruse an add may pop up, or a picture may catch my attention and there i am, alone again in the wine isle. This time will I choose to walk away or will I again reach for that bottle?
Post a Comment
Read more
More posts

Phoenix Rising
I'm a wife and mama of four kiddos. We have two amazing boys who teach me more about myself everyday and 2 baby girls who were taken way too soon who are whooping it up in Heaven with Jesus. This blog is about love, life, loss, hope, devastation and faith. It's all just my musings as I walk through this life.